The Hardest LSAT Reading Comprehension Passages of All Time 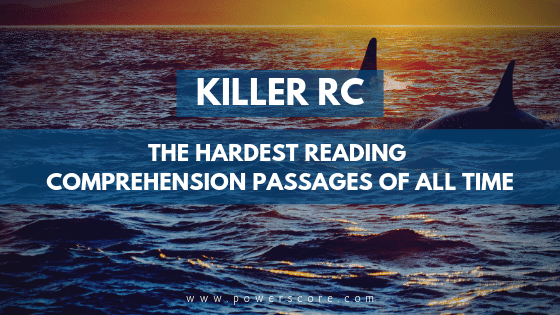 Students studying Reading Comprehension passages often want to see the hardest passages in LSAT history. To that end, here is a list of the hardest Reading Comprehension passages of all time, in chronological order. It is accompanied by our at-times jesting commentary. Although we can no longer offer direct downloads of the games due to LSAC rules, this publication identifier link will tell you where to find them.

Want to try them all? We’ve compiled them into a Digital Practice Set.

This was the first “hard science” passage ever to appear on the LSAT. The passage discusses adaptive responses in organisms and features an extended discussion of developmental responses in waterbugs… hence the name. The text includes fun terms like “dimorphic,” “macropterous,” and “micropterous,” which were quickly forgotten by the end of the passage.

This passage contained only six questions, but the discussion of classical social psychological theories (“relative deprivation” and “J-curve,” to name two) in Civil Rights movement literature caused fits for most students.

This is one of several passages to include the views of Ronald Dworkin, a noted legal scholar. Regrettably, the topic discusses legal cases that contain highly controversial issues that are not easily resolved.

This may be the most difficult passage on this list. The passage discusses personal names, and references John Stuart Mills, Claude Levi-Strauss, and the Hopis of the southwestern U.S. A passage about people’s names sounds fun, but this one wasn’t.

Steady-state economics is a school of economics, one that most didn’t want to learn more about after reading this passage. The text at times delves into deep economic theory and then, to make matters worse, the passage contains eight questions.

This is possibly the easiest of the passages on the list. Of course, because this list is about the hardest LSAT passages of all time, that still makes this passage extremely challenging. Here’s a brief, fair-use sample of the text: “The Western scientific heritage is founded upon an epistemological system that prizes the objective over the subjective, the logical over the intuitive and the empirically verifiable over the mystical.” Umm, yeah, what he said.

Overall, this was a difficult RC section because the second passage—about Louise Gluck—was also tough. Test takers who fought their way through that passage would soon arrive at this brutal closer to the section. The science-based topic—embryo polarity, or how organisms determine what is up and down, and front and back—is unknown to most students, and certainly presented a reading challenge. The passage was then followed by eight questions, furthering the misery.

Maize is just another word for corn, so at first this passage doesn’t look too difficult. Indeed, the first paragraph is fairly easy to understand. It lays out the importance of maize to the cultures that cultivated it. After the first paragraph, however, the discussion turns extremely detailed and covers the physical science behind why maize is so bountiful. Corn never tasted so bad.

Similar to the Maize passage, the first paragraph of this passage is fairly easy to understand (it discusses the replication of experimental results in fairly clear terms). Thereafter, the passage discusses “riddled basins of attraction” and fractals as an analogy of systems where replicating results can be impossible. Those portions of the passage lead most students to feel that the passage was impossible.

This passage covers Maxine Hong Kingston and the literary antecedents of her writings in Chinese talk-stories. While the passage wasn’t overly absorbing, the eight questions were where the real difficulty appeared, and many students struggled between two or more answers on more than one occasion. Overall, after reading the passage, most students wanted nothing more to do with Kingston or her stories.

This passage covers clay tokens and envelopes that date back to 4000 BC. According to one writer, these tokens and tablets were a precursor to the development of written language. After reading this, you won’t even want to look at a clay pot again.

This passage covers designer Eileen Gray’s fascinating career journey with lacquer, furniture design, and architecture. She was extremely detailed in her designs, and often focused on simple, clean looks with multiple usages. She’s actually quite fascinating, but the questions in this passage make for a rough go of it.

Should judges be honest in their rulings? We always thought so, but there has apparently been some debate over this point within the law (who knew?). Regrettably, reading about this topic is about as dull as one would expect, and that is compounded by the flowery style of each of the two passages within this Comparative Reading set. Example: “To argue for rigid adherence to a norm of sincerity is, they say, naive, foolhardy, and even dangerously utopian.”

One striking thing about the list is that none of the passages on the list or in the honorable mentions appeared first in a section. Every passage listed above appeared second, third, or fourth in the section. This does not mean, of course, that hard passages never appear first in a section. In these cases, test makers kindly chose not to place those passages at the very front. One final note about the list. By definition, any such list is subjective, and what challenges one student may not be difficult for another. We know these in particular are extremely difficult from years of experience and from the frequency students ask about them. If you can solve any of the passages on the list in less than nine minutes, you have done a great job.

Want to fine-tune your skills with an expert? Have a private tutor review your results with you!